5 Old-Timey Things You and Your Grandparents will Enjoy 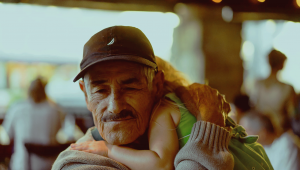 What five items can both you and your grandparents enjoy?

Grandparents are the kind of people you want around for a long time. Without them, you literally would not have existed. Caregiver services, especially in Chicago, value the sanctity of family; and with that said, it’s time to give tribute to the people who gave your parents life, who in turn gave you the gift of life.

Many of us have grandparents who lived in a time where many things today’s youngsters have all come to know and love (or be addicted to) did not exist either. You’ve probably already tried teaching them how to use computers, or even got them assistive technologies. This time, here are 5 things you and your grandparents can gather to have fun!

Back when colored photos rare and expensive to develop, black and white photos were all the rage. Though they may not have been produced at the best quality, your grandparents were nonetheless happy to view and even display these simple memories for the years to come.

If ever you’ve decided to entrust your grandparents’ care under caregiver services, bring as many of their photo albums as you can. Precious sentiments and other treasures of a golden age will surely be appreciated by them, and you’re sure to hear the stories behind each and every one.

Can you imagine living without itunes and mp3s? Back in a time when modern music-playing machines and other electronics were non-existent, the phonograph was what graced homes with music. In fact, even until now, these devices are considered as one of the greatest antiques to collect.

Every music lover knows what a phonograph is used for. Just put in a vinyl record, put on the disc scratch, crank it up and listen to the greatest hits of the time. If you were to give this device as a gift to your grandparents, not only will they appreciate the gesture, they’ll be sure to gather their old records and start playing them.

Speaking of music, this nostalgic device is sure to strike a chord with your grandparents’ hearts. Imagine a time when people would flock to bars and other musical establishments and, instead of focusing on the drinking, one would drop a coin in the jukebox and people would then start dancing to the latest craze in music at the time.

If you happen to find a working one at this time and age, then bring your grandparents along with you and witness the magic of their time come alive. You can even join them in dancing if you want.

There’s nothing more nostalgic than the sight of a car that’s survived through the times. While many modern cars come equipped with the latest gizmos and gadgets technology has to offer, the feel of getting to actually drive one for yourself is unlike any other.

When the next car show comes around, take your grandparents with you and let them have the time of their lives. Who knows? If you’ve got the cash for it, maybe you and your family will be able to drive one of those vintage cars home.

Last but not the least, classical films. The 50s and the 60s were considered a golden age for the world of cinema, which means that your grandparents (and possibly your parents as well when they were young) were able to marvel at the scenes unfolding in the big screen.

While many of the films from that era are long gone or extremely difficult to find, there are also just as many films that have survived the passage of time. Some of the more popular ones were even restored with the help of modern technology, assuring audiences a better quality in both sound and picture. Grab some popcorn and start watching!

Nostalgia is a feeling that should always be treasured in everyone’s hearts. For your grandparents, and all other people of their age, be sure to include them in your sentiments and give them the memories for them to remember for years and years to come.